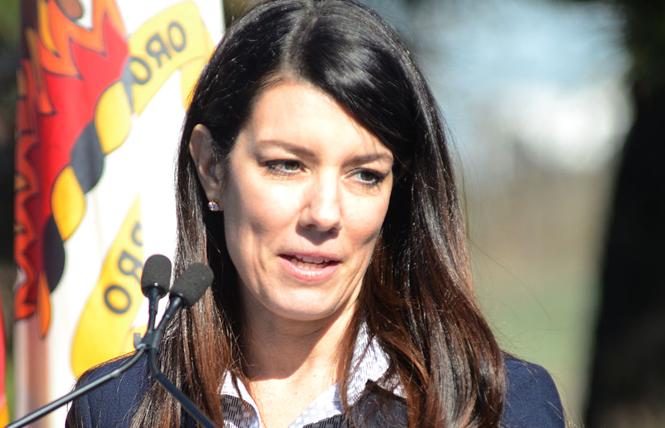 The personal has proved to be political for San Francisco Supervisor Catherine Stefani since being appointed in January as the representative for Cow Hollow, the Marina, Russian Hill, and Pacific Heights.

In March, when voting to rename a terminal at San Francisco International Airport in honor of the late gay rights icon and city supervisor Harvey Milk, Stefani spoke of how her younger sister, Christine Stefani, struggled to come out as a lesbian to their Italian Catholic family in the Central Valley where they lived.

Recalling her support for the naming proposal during a recent editorial board meeting with the Bay Area Reporter, Stefani said it was one of the "most emotional votes" she has cast during the eight months she has served on the board. Former supervisor Mark Farrell named Stefani to his District 2 seat in January after a majority of the board elected him mayor following the sudden death in December of then-mayor Ed Lee.

"What I saw my sister go through in the 1990s coming out was torture for her. She was engaged to a man because she thought she had to do that," recalled Stefani, 48, a former senior aide to both Farrell and his predecessor, supervisor Michela Alioto-Pier.

Today, Christine Stefani, 42, lives in Davis with her partner of two years and works as a nurse in the maternity ward of a local hospital. Four years ago, at the invitation of her older sister, Christine Stefani and her mother marched together in San Francisco's annual Pride parade for the first time with Farrell's contingent.

"When I came out at 21, my mom wasn't very accepting and we didn't have the best relationship for a couple years. Fast forward to my mom doing her own research with PFLAG and other organizations to fully accept me," she recalled. "Then to march in the Pride parade with me was such a big experience. It brings tears to my eyes."

Last month, Catherine Stefani was one of the few local politicians to withdraw her endorsement for a school board candidate when her past comments opposing transgender rights were highlighted in media reports. The decision didn't surprise her sibling.

"My sister always has been an advocate and always supported gay and lesbian rights. She has been supportive of me 110 percent since I came out," Christine Stefani told the B.A.R.

As the city grapples with how to address rampant intravenous drug use on the streets, substance abuse is another issue that Stefani's family has personally dealt with. One of her sisters is marking nearly a decade being sober, while her brother is battling his own heroin and meth addiction. Their father, who is divorced from their mother, is helping to raise two of his sons as he seeks help.

"It doesn't discriminate, it hits everybody," said Stefani.

It is partly why she is supportive of seeing the city open safe injection sites as long as they provide substance abuse services and other support to users of the facilities.

"I would only support these sites not to only facilitate someone's drug abuse but to help them get better," said Stefani, who is not opposed to having one open in her district if the right location were found.

Campaign
Stefani, who for the last two years had served as San Francisco's county clerk, lives with her husband and their two children in Cow Hollow. She is running this November for a full, four-year term on the Board of Supervisors.

Formerly a deputy district attorney in Contra Costa County, Stefani is fending off two challengers: BART board director Nick Josefowitz and Schuyler Hudak, who serves on the board overseeing the San Francisco General Hospital Foundation.

Schuyler is a renter in the Marina who is founder and CEO of news company Cor Media. Josefowitz, who lives with his wife and their twin sons in Pacific Heights, started his own solar company and holds stocks in a number of companies, including Lyft, Groupon, and Joyable, according to his financial disclosures he reported to BART.

They both argue that Stefani represents more of the same, entrenched leadership at City Hall and that it is time to elect a new representative for the district. It was a theme the two candidates repeatedly made during a recent debate sponsored by the United Democratic Club.

(Its members voted to support Josefowitz as their number one choice in the race and Stefani as their number two. Under the city's ranked choice voting system, voters can rank up to three candidates in order on their ballot. Not invited to the debate since he is a Republican was John Dennis, a real estate developer and investor who eight years ago unsuccessfully challenged House Minority Leader Nancy Pelosi.)

The city is suffering from a "lack of ideas, lack of will, and lack of leadership," said Schuyler, who disclosed she was sexually assaulted in 2016 in Pacific Heights. "I am running because I believe San Francisco deserves so much better."

Josefowitz spoke of how someone broke into his family's home, stole a computer and camera, and left behind drug paraphernalia. Although the police showed up, he said they never followed up about the break-in.

"We can't just vote for the status quo," argued Josefowitz. "For too long we have been moving in the wrong direction. It is time for a change."

While Stefani acknowledges she is well informed about the workings of City Hall, she also argues she is a fresh face in terms of serving on the board.

"I have been able to hit the ground running," she told the B.A.R. "I know my district very well, I know the people, and I know the issues."

While none of the candidates were able to secure an endorsement from the Harvey Milk LGBTQ Democratic Club, the more moderate Alice B. Toklas LGBT Democratic Club endorsed Stefani. Newly elected gay District 8 Supervisor Rafael Mandelman, running himself for a full four-year term on the fall ballot, also supports his board colleague in the race.

"She has a reputation for collegiality and a willingness to work with everyone that I think is true and I really value," said Mandelman, noting how Stefani has been a fierce advocate, in particular, for gun control regulations. "For District 2, she is a terrific choice."

Stefani is confident she will have better electoral success than the string of Lee's board appointees in recent years who were ousted by voters. Unlike those supervisorial picks, Stefani noted she was appointed by a different mayor and had served as a supervisorial aide. It was, she added, true of the only supervisor appointed by Lee who won their bid to retain their seat, District 4 Supervisor Katy Tang.

"We know the job and are less likely to step on a land mine," said Stefani, who was trained on how to be a successful candidate by Emerge, which works to elect women to public office.