SF county clerk replaces new mayor on Board of Supervisors, will run for seat

Mayor Mark Farrell has picked his replacement as District Two supervisor: County Clerk Catherine Stefani. And she isn’t planning on being a caretaker supervisor.

Stefani was sworn in Tuesday morning at the Moscone Recreation Center in the Marina, in front of a sun-dappled baseball field and children’s playground. An hour later, she pulled her papers to run for the seat in November. 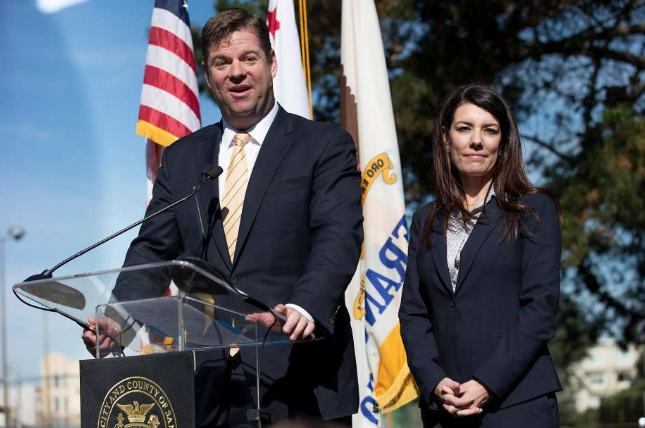 The District Two seat became a point of discussion almost immediately after Farrell was voted to be interim mayor by six of his colleagues, in what was seen as a coup by the progressives to keep acting Mayor London Breed from retaining the office until the June election to fill out the unfinished term of Mayor Ed Lee, who died in December.

Stefani, a longtime legislative aide who worked for Farrell and former District Two Supervisor Michela Alioto-Pier, has amicable relationships with the progressive supervisors who put Farrell in the city’s top job.

“I come from a place of empathy and connection with others, a sense of responsibility and obligation to be in service to others, and most of all, from an urgent need to act on serious issues that are facing my district, our city and our nation as a whole,” Stefani said during her swearing-in speech, which was attended by five supervisors, Assessor-Recorder Carmen Chu and Oakland Mayor Libby Schaaf.

Tuesday morning, Supervisor Malia Cohen had made a separate announcement, saying she would introduce a resolution at the afternoon Board of Supervisors meeting urging Farrell to make Stefani a “caretaker” who would not run in November.

“The question I plan to raise is, ‘Are we standing on principle, or are we standing on personality?’” Cohen said in an interview an hour before the board meeting. She accused the progressives of hypocrisy for supporting Stefani even though she plans to run in November. Cohen did not introduce the resolution, however, because Stefani had already been appointed and pulled her candidate’s papers.

Several progressive supervisors had worried publicly that keeping Breed in the mayor’s office would give her an unfair advantage in the race for mayor that will be decided in the June 5 election. They voted to install Farrell largely because he had pulled out of the mayor’s race.

The political posturing ramped up when a loose group called the San Francisco Progressive Alliance joined with Cohen and sent out a mass email exhorting Stefani not to run.

On the other side, members of San Francisco’s political establishment heaped praise on the new supervisor.

“I could not be more confident in my appointment of Catherine as District Two supervisor,” Farrell said at the swearing-in.

Schaaf called Stefani a symbol of the #MeToo movement.

“Just know what a badass your mom is,” Schaaf told Stefani’s two children at the swearing-in.

Speaking later at her first board meeting, Stefani called the supervisor seat a “lifelong dream,” and said she would emphasize public safety, solutions for homelessness and protections for small businesses.