They’ve been vomited on, spat on, beaten, sucker punched, shot with fire extinguishers, and threatened with murder.

Now Muni operators have had enough. 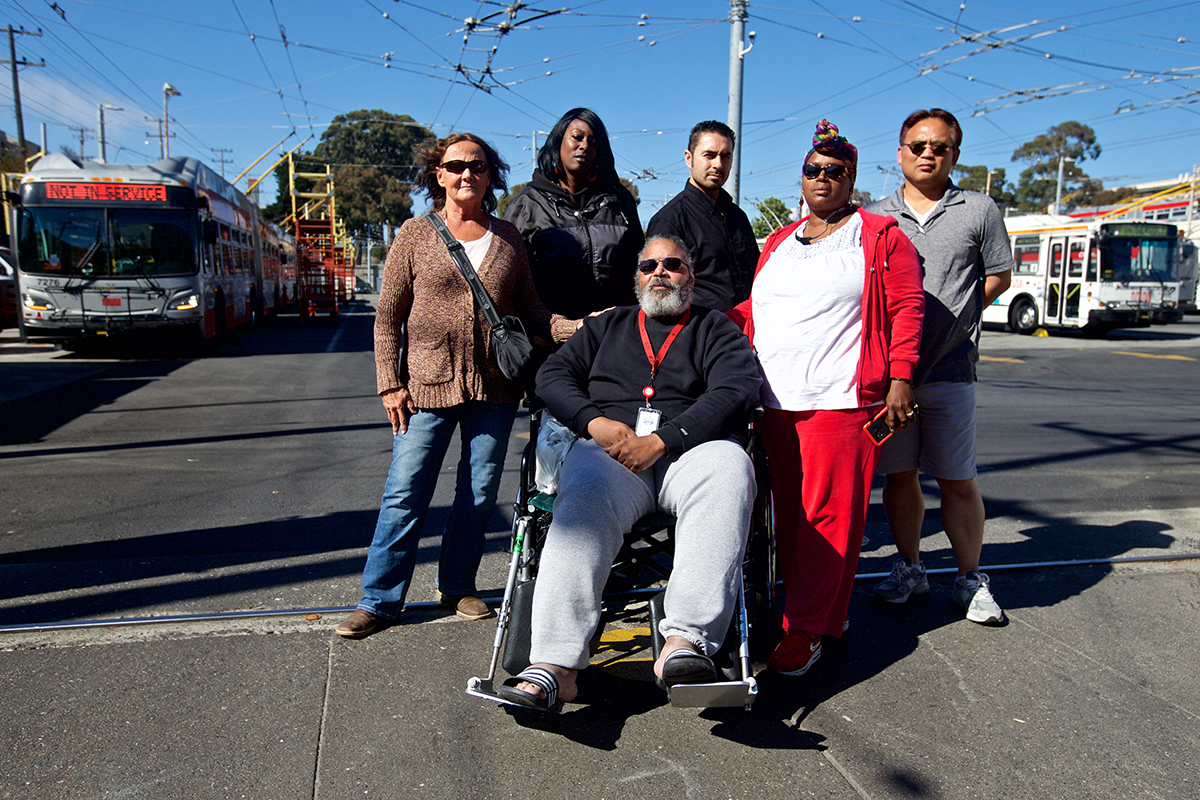 The men and women who help ferry more than 700,000 people in San Francisco every day, and night, aboard buses and light rail vehicles have come forward to tell their tales of assault, in the hopes of compelling The City to do more to keep them and the riding public safe. Those operators were gathered by their union, Transport Workers Local 250-A and its president, Roger Marenco.

“We can sit here and tell you monster stories until we’re blue in the face,” said Michelle Moore, a long-time Muni operator who had a large cup of warm vomit dumped on her head after she stopped her bus one day last year in December.

“It gets into my mouth. My eyes,” she said of the vomit. “The public is not safe either,” she added.

Moore and other Muni operators said their beef with their management, the San Francisco Municipal Transportation Agency, is as much how they handle assaults as anything. SFMTA statistics actually show the number of assaults trending somewhat downward — presumably good news for transit operators. But bus drivers speaking to reporters in a Starbucks across the street from a Muni bus yard in the Mission District said management pushed them to not report certain incidents, urged them to come back to work before their injuries had time to heal, and make dangerous mistakes when handling assault calls that worsened the threat.

Paul Rose, an SFMTA spokesperson, said that’s because their strategies to reduce assaults are working. SFMTA has increased staff in its command center, Rose said, from 35 to 45. SFMTA also formed an “assault reduction task force” within SFMTA to keep employees safe, and has installed new silent alarms in vehicles, and designed vehicles with plastic enclosures to protect them from assault.

“The safety of our operators is paramount,” he said. “We agree that we need to do everything we can to keep these valuable people safe and that is why we are working so hard to find solutions.”

That’s small comfort to Barry Chamberlain, a 17-year Muni operator who was beaten until he was bruised over most of his body, and choked by a man he found sleeping in the back of his bus. When the man held Chamberlain, choking him, he used a racial slur and told the Muni operator, “if I had a gun I would blow your brains out.”

Daymian Turner, a five-year Muni operator, said he has been assaulted three times in the last year. He’s been shot with a fire extinguisher until he was completely covered in chemicals, for instance.

Jefry, a Muni operator who declined to give his last name, sported a once-punched-in nose that was hard to forget. He earned that bloodied faced when he stopped to let a woman board his bus, between stops, but did not see her boyfriend. When the boyfriend caught up to the bus and boarded, “I saw a flash, fist, boom.” Jefry’s cheek was fractured under his eye, and he now has six implants where his real teeth once were.

Deanna Lockridge, a 12-year Muni operator, was beaten and spat on during a citywide transit meltdown in 2012 when tempers ran high. Her assailant spat all over her face, and gobs of it hung from her eyelashes and landed in her mouth. Her face was swollen from a “bacterial infection” for months afterward, she said — but dispatchers took an inordinate amount of time to answer her call.

And though the number of assaults has dropped, operators said the number of annual assaults is still unacceptable, especially considering SFMTA pays the San Francisco Police Department $1.3 million annually to patrol Muni vehicles. In 2016, SFPD commanders took station captains to task for failing to adequately patrol Muni, the San Francisco Examiner previously reported. SFPD did not respond to requests for updated comment.

Supervisor Catherine Stefani, who represents District 2 including the Marina and Pacific Heights, has scheduled an upcoming hearing to look into safety aboard Muni vehicles.

Hearing the operators stories, as relayed by the Examiner, she said “No operator should feel they’re in danger when operating their vehicle.”

Arriving to the group interview in a wheelchair, Chamberlain, a 17-year Muni operator, said he is unable to walk still after his May 2018 assault.

“I’ve been here seventeen years, I’ve never had hands put on me like that,” he said of the incident.

Chamberlain reached the end of the 22-Fillmore line when he noticed a man sleeping in the back of his bus. He asked him to leave. He repeated himself three times, and when Chamberlain received no response he walked to the front of the bus to press the “priority” button to signal Muni headquarters for help.

That’s when the man began to hit Chamberlain from behind, and then to choke him.

The man leaned in and, using a racial slur, told Chamberlain, “If I had a gun I would blow your brains out.”

That’s when the man picked Chamberlain up and threw him off the bus.

“Do any of you remember the Sally Field show, ‘The Flying Nun?’ I was literally thrown through the air, being videoed by people who saw the assault,” Chamberlain said.

Chamberlain took issue with workers compensation, saying he had to pay out of pocket for some of his medical costs, and is — incredulously, he said, since he cannot walk — being told to go back to work.

During his five-and-a-half year stint as a Muni operator Turner has been physically attacked and shot with a fire extinguisher. The latter incident left him completely covered in white chemicals from head to toe, and he said he’s been assaulted three times in the last year alone.

The incident that gives him most pause, however, was one year ago, the day a passenger left his glasses in a front seat of Turner’s bus. The operator spotted the spectacles, picked them up and walked them to the back seat.

“I worked my hospitality,” he said.

The responders, he said, were woefully inadequate, and that needs to change. “This guy (on dispatch) is asking me all these damn questions. I’m like look — send the police.”

Jefry, who declined to give his last name but whose once-punched-in face is tough to forget, earned a bloodied nose through an act of kindness. While driving the 9-San Bruno one night, a woman ran after his bus, begging him to stop, waving him down. Jefry hit the brakes and let her board.

When Jefry began to roll, she started to scream. “My boyfriend!” is behind the bus, Jefry recalled her saying.

Jefry, already having stopped the bus once between stops, told her the boyfriend would have to catch up with them.

The 9-San Bruno reached the next stop, and the woman held the doors open, refusing to let the bus leave.

The boyfriend boarded, and the next few moments are still a blur to Jefry.

“I saw a flash, fist, boom. I didn’t even see it,” he said. “I got fractured here” he said, pointing to his cheek just underneath his eye. “I got,” he said, pulling his mouth open, “six (tooth) implants now.”

Jefry said after the incident, he was questioned incessantly by management about his actions. “Like I did something wrong,” Jefry said.

The photos of Lau afterward show his face misshapen from the assault.

But, perhaps because Lau was in what he called his “monkey suit,” the Muni operators uniform, a nearby security guard at a cannabis dispensary jumped into the fray to save Lau. The security guard kept the would-be assailant subdued until the police arrived.

Lau said his treatment after the incident was less than hospitable, which he credits to a lack of operators in management positions.

“I don’t see many of our managers have a class B driver’s license,” Lau said, describing the license needed to drive a bus. “If they did, they might see our situation.”

One fateful day in 2012, Lockridge, a now 12-year Muni operator, found herself in the middle of a transit catastrophe.

A truck had accidentally taken out power lines that led to a Muni train standstill, sending thousands of riders to already crowded buses.

“Everyone was mad, no one could get home,” she said.

Things were already tense when a man boarded her 22-Fillmore at 16th and Mission Streets and began to spit on and punch everyone until they began to flee her bus, she said.

She discreetly called dispatch for help and gave his description, while he was on the back of the bus. But by the time the man came to the front of the bus, the SFMTA dispatcher loudly asked for the assailant’s description a second time, tipping him off.

The man flared in anger, accused Lockridge of calling the police, and attacked her.

“He was spittin’, he was swingin’,” she said. “He spit directly in my mouth. I’m blocking hits. Then he spit in my face. It’s all in my eyes, spit is hanging from my eyelashes. I’m in this little compartment and there’s nowhere for me to go.”

Then she hit him with the wooden “wheelblock,” used to help the buses brake. He fell to the sidewalk, out cold.

That wasn’t the end of her troubles. Passersby thought she had attacked him, and threatened to attack her.

Police came and defended her, eventually. But, she said “It took an inspector 45 minutes to come to me and help.”

That shower of spit took its toll, she said, and for two months afterward her face was inflamed from a bacterial infection.